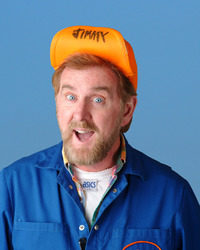 Comedian Jimmy the Janitor, one of Canada’s most popular comedy characters, is packing up his funniest new comedy and heading to the Bailey Theatre, Camrose on Friday February 10, 2023. This East Coast funny man has appeared on CBC Radio and Television, CTV, the Comedy Network, and has 11 comedy albums. Jimmy’s nationally syndicated daily comedy show has entertained audiences for 24 years in over 90 radio markets across Canada. Jimmy the Janitor" has sold out theatre’s and community halls from coast to coast, so get your reserved tickets early.

Reviews “What a great show! We were overwhelmed with inquiries and sales. The show was completely sold out. -Geoff Keymer General Manager King’s Theatre, NS

“Great job Jimmy the Janitor! The show was a hit! Everyone thoroughly enjoyed their evening”. -Canadian Bull Congress, Camrose AB

“The sold-out Stirling audience responded with whole-hearted enthusiasm to Jimmy the Janitor’s outstanding one-man show. Roars of laughter came from the youngest teen to the oldest grandpa. You don’t have to talk dirty to get huge laughs, you just have to be funny, and Jimmy the Janitor is all that and more. I just wish we had more seats in our theatre to fill the demand!” -Stirling Festival Theatre, Stirling ON

“Jimmy the Janitor swept the West Coast crowd off their feet with clean, “bang your fists on the table hilarity!” -Construction Association of Victoria, BC