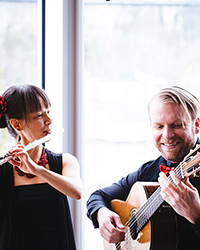 This duo brings an inspiring brand of ethno-classical music, influenced by traditional and folkloric music discovered around the world.

Flutist Marie-Noëlle Choquette and guitarist Charles Hobson are described as a duo that breaks the mold, both in sound and approach. They have performed throughout Canada, the United States and Argentina and have released three critically acclaimed albums: Costas (2018), Muzica (2013) and Envol (2011).

This performance is also made possible by Prairie Debut.