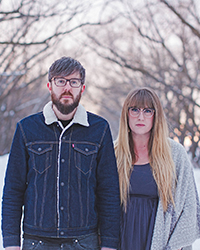 100 mile house are the Edmonton-based husband and wife folk duo Peter Stone and Denise MacKay. They seem naturally attuned to life’s impermanence; the reality that we must cherish what we have, while knowing we must eventually let it go. This impermanence is the poignant double meaning behind the new album Love and Leave You.

Made at Edmonton’s Riverdale Recorders with Scott Franchuk (Corb Lund, Del Barber, Scenic Route to Alaska) and a host of guests ranging from JUNO nominee Chloe Albert to a heartswelling string section, Love and Leave You builds on the themes of 2016’s Hiraeth, which earned 100 mile house a Western Canadian Music Award for Roots Duo/Group of the Year, and a Canadian Folk Music Award nomination for Ensemble of the Year.

Their previous release, Hiraeth, was named after a Welsh word that loosely translates as a longing for a place or person who may never have existed. Stone and MacKay used this concept to explore some of the darkest corners of their lives. On Love and Leave You they have emerged—stronger, wiser, and more honest than ever before.