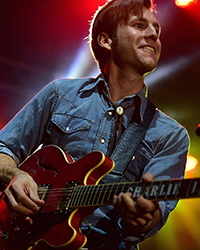 Presented by the Bailey Theatre Society

Charlie Jacobson is a blues songwriter and multi-instrumentalist born in Red Deer, Alberta. This guitarist, tunesmith and singer has already toured and recorded with Canadian Blues legends Donald Ray Johnson, pianist David Vest, and Kenny “Blues Boss” Wayne and all of this foundation building has paid off: Charlie’s guitar appears to be part of his body when he’s on stage, like a third arm. It is not uncommon to see him weaving throughout crowds and jumping from drum kit to table, while singing his heart out, and never losing a note on the guitar.

His first full length album titled “Alberta Flood” was released in 2015 and received glowing reviews from sources like the Edmonton Journal and the Ottawa Citizen and support from CBC’s Saturday Night Blues.